Get ready for a supercharged gaming experience with Kwiff Casino. This is not your ordinary run-of-the-mill online casino.

Kwiff Casino brings you thousands of games from the biggest and most-beloved game developers. Here, everyone can find something they love to play. And it is not just casino games, they also have a sportsbook with bets all over the world.

Their unique casino design really pops. Kwiff has streamlined the gaming experience and made everything easy for their customers.

Grab a welcome bonus to either the casino or the sportsbook and check out what Kwiff can do for you. 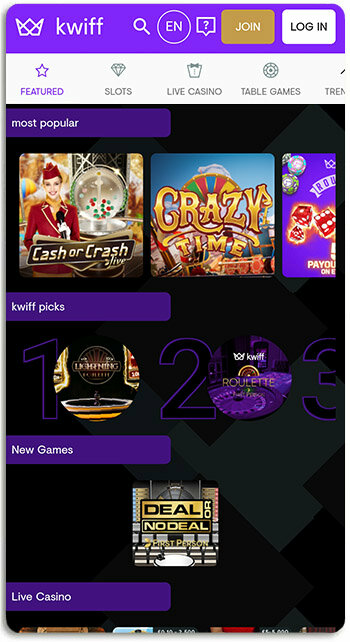 If first impressions count for anything, it would be easy to give Kwiff Casino a miss because the layout of the site is not particularly inspiring.

I’m not a fan of the bells and whistles which are evident at many online casinos but this one easily falls into the opposite end of the spectrum.

It almost seems that the casino has been developed as something of an afterthought with a very basic design and what appears to be a limited selection of games.

The sign-up process is straightforward, just the usual step by step questions requiring name, date of birth, email address etc with the entire process taking less than a couple of minutes to complete.

Kwiff casino players get an amazing bonus when you start playing.

To get started, just make your first deposit. Then when you wager £20 on slots, you will get 40 spins on Book of Dead. You can do this for five days and get a total of 200 spins.

These spins have no wagering requirements, but the total withdrawable sum from them is £250.

They also have another bonus for sportsbook and ongoing offers for everyone. Check out the promotions page to see more.

The Kwiff casino welcome bonus is advertised as 200 bonus spins on the Book of Dead slot, but on closer inspection it is 40 bonus spins per day over the course of 5 days which are added to your account when £20 is wagered on any slots.

My usual game of choice for these offers would be minimum stakes and maximum lines on Cleopatra but as this game isn’t available, I decided to have a dabble on Starburst.

After I had wagered £20, a pop-up window appeared to inform me that my bonus spins on the Book of Dead slot were ready to use.

Any winnings from the bonus spins have no wagering requirement which was a pleasant surprise and there is a maximum withdrawal of £250 over the 5 days of bonus spins.

As each bonus spin is only 10p, the chances of exceeding the £250 in winnings must be quite a tall order so I was quite happy with those terms.

I did wonder if it would be possible to claim the Kwiff sportsbook welcome bonus as well as the free spins on the casino so I jumped on to the live chat who politely informed me that it is unfortunately one or the other.

You can join the Kwiff Loyalty Club to get additional gifts and prizes when you bet on matches.

To join the Loyalty Program, you just need to opt in from our promotions page.

Kwiff brings you great games from a ton of different game developers. They wanted to give you as many options as possible, so you can play your favourites, no matter what they are.

The games library consists of over 1,500 great games, which includes all the big hits from the most popular developers. Browse their categories and discover great new slots, table games and scratchcards.

Don't forget to check out the sportsbook. You have a great selection of local matches, as well as bets from all over the world. You can even bet on matches while they are playing.

My first impression of the game selection was Kwiff is that there is a scattering of top-level games, but I had never heard of most of them.

For instance, in the ‘most popular’ category, Butterfly Stax, Magic Stars and Fire Joker are listed, with only Twin Spins being a title that I am familiar with.

Kwiff Casino are partnered with the likes of NetEnt, Microgaming and Evolution Gaming, so it might be a good idea to have some of their more popular titles displayed on the website in order to give the casino a little more credibility.

On the casino home page, the slots are listed by themes such as Mythical Creatures, Kings and Queens, Pagan Gods and even though there is a search facility, it does seem that you are made to jump through hoops to find the game that you are looking for.

I did check out the table games section of the website as there is an impressive selection of Blackjack and Roulette games, not forgetting the Blackjack lobby which hosts live dealer games which are developed by the industry-leading Evolution Gaming.

I ended up playing Starburst and Space Invaders, I wouldn’t usually go for either of these games but to be perfectly honest, they were the first two slots I recognised from scrolling down the page.

Both games loaded quickly, and I encountered no problems whatsoever during the game play.

Playing on the go is easy as 1-2-3. Just grab your phone or tablet, open your web browser and you are good to go. You can also download the mobile app for Apple or Android for that dedicated experience.

Kwiff mobile casino is responsive and fast, and can adapt to all modern devices and screens. You can play slots, bet on matches or join the live casino tables just like you could on desktop.

The first thing I do when playing the mobile version of an online casino is to check if there is a dedicated iPhone app.

In the case of Kwiff, there is only a sportsbook app so I downloaded that to see if the casino could be played from within that app, and even though there is a casino button, clicking on it took me away from the app and directly to the casino section of the Kwiff website.

The casino was easy to navigate on my iPhone 8 but just as with the PC version of the casino, the design and layout has a very basic feel to it.

I continued playing Starburst and Space Invaders on my mobile without any problems, both games loaded quickly and there was no buffering or anything like that.

Live casino games are available on Kwiff. Their selection covers all of the popular tables, like blackjack, roulette, baccarat and such, as well as game shows and some unique titles.

Experience casino gambling just like in brick-and-mortar casinos. Sit by a table and play with a real-life human croupier. This is as close as you can get to a real casino experience in the comfort of your own home.

Kwiff's goal is to provide a safe gambling environment. They do their best to make sure everything is fair and on the level.

Gambling is a serious problem for some people, and Kwiff provides such players tools to keep their gambling under control. You can add deposit limits, loss limits, reality checks or even opt-out of certain products, or exclude completely.

If you ever feel like you are losing control over your gambling, don't hesitate to contact the support. They are trained for this and will be able to help you set limits and direct you to external help services.

Kwiff customer support team is there to help you. Don't hesitate to contact them if you have any questions.

You can contact the support services via email or live chat. Our support is available 24 hours a day.

I found the customer support at Kwiff Casino to be OK, providing any questions are on the basic side.

The live chat is available between 8am and 12pm and I contacted them twice, both times having to wait less than one minute to be connected.

Bearing in mind that the first time I contacted them was midday on a Saturday, I was impressed.

The live chat operators were very friendly, my first question about KYC was answered quickly and without any fuss but my second query regarding specific wagering requirements was a bit on the frustrating side.

To be fair, it was probably down to my question being ‘lost in translation’ but after talking to a live chat operator for 15 minutes, it was obvious that I wasn’t going to get a correct answer, so I thanked them for their time and ended the chat.

Getting to know who the players are is important, in both for security and legal reasons. Kwiff needs to make sure all players who gamble can legally do so.

For this, they may ask you for documents as proof of your personal information. These documents may include:

I was surprised not to receive any kind of verification request when I opened my Kwiff accountant when I made my first withdrawal.

I decided to kill two birds with one stone and contact live chat to double check that I wasn’t required to send any form of documentation and they politely informed me that it wasn’t necessary as I had been automatically age verified by their system.

They went on to say that I may receive a KYC request at some point in the future and if so, I would be contacted by email.

Even though a KYC request is put in place for the safety of the customer, I always prefer it when automatic checks are put in place so that there is no hanging around and you don’t have to wait for your documents to be verified.

Depositing and withdrawing is easy and fast. Just pick the method you like the most, choose how much you want to deposit or withdraw and that's it. Deposits are instantaneous and withdraws can take up to 3 business days.

The banking options at Kwiff Casino are extremely limited with Visa, Mastercard, PayPal and ecoPayz being the only payment method available (bear in mind that due to current legislation, credit cards are not accepted for UK deposits)

In my opinion, there are not nearly enough banking options available and it will be the case that potential Kwiff customers will simply look elsewhere for a casino which can offer a wide choice of deposit options to suit their requirements.

There is a very reasonable minimum deposit and withdrawal requirement of £10 and there are no processing fees.

I made a deposit using my UK Nationwide Visa debit card and the payment went through without any problems.

When it came to my withdrawal, again no problems whatsoever, the withdrawal was processed exactly 24 hours after I requested it and landed back in my bank account 3 days later. 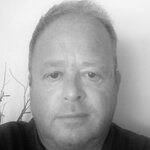 Gary has been writing about online casinos for over 15 years and is passionate about the industry. His content is published across a wide range of iGaming websites and sites of authority such as the Huffington Post. His reviews are an honest reflection of his experience and he is well known for telling it as it is.

Their app is very engaging, I like the feel and layout. Also their customer service has always been helpful and responsive.

Downloaded their web app and must say that really improved the overall experience.

Took my deposit via Visa card, but only able to withdraw via Mastercard or Bitcoin. Now supposedly getting help via live chat, but it doesn't work. Complete con. Don't use!!!