Aviatrix is the name for both the supplier and the crash game of their design. Aviatrix the game provider is an NTF-based B2B iGaming Solution. The brand was founded in 2021 and headquartered in Limassol, Cyprus. In 2022, Aviatrix released their unique crash game carrying the same name as the brand. Going beyond regular crash games, Aviatrix the game gives the players a chance to create their own aeroplanes that are also NFT items. 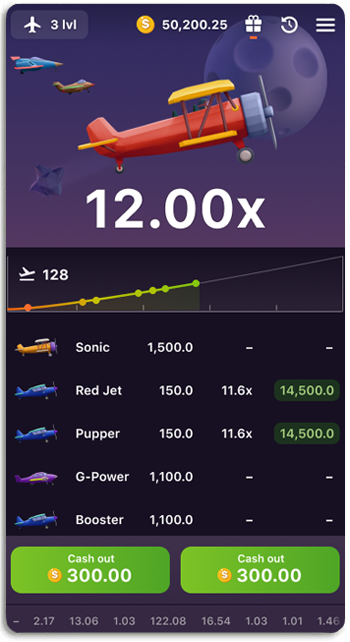 The supplier currently has only one game, also known as Aviatrix. Aviatrix is a crash gambling game, which means it's a type of game where the player places a bet on something (usually a plane, car, or a rocket) and tries to cash out before the object comes crashing down.

In Aviatrix, you get to bet on aeroplanes with two separate bets. Players can also level up, unlock new types of planes, and dip into the loyalty mechanics such as cashback. But that's not all - the planes are customizable NFTs (non-fungible tokens) that can be named and upgraded, and they can participate in reward distribution. However, if you're not interested in the NFT part, you can completely ignore it.

The game mechanics allow the game also to have a multiplayer feature, where players can compete with each other.

Aviatrix is deeply customizable for online casinos to make it native to the casino's interface. The casino's logo can be included in the game, and even the plane colours can be selected to reflect the casino's brand.

Aviatrix is fully optimised for mobile devices so that you can play this innovative crash game anywhere. The mobile UI is very simple and easy to use and watching planes take off even on a smaller screen is highly enjoyable.

Aviatrix doesn't have any live games on offer.

For now, Aviatrix isn't licensed in any jurisdiction, which means it currently can't be found in any UK-licensed casino. However, this might change in the future.

Aviatrix the game is, according to the provider, "Provably Fair" which is a technology guaranteeing 100% fairness of the results. The player can check the fairness of each game round from game history when the game is open.

To play Aviatrix or the supplier's other future games, you need to be 18 or older.

Aviatrix is available in English.