Like the name implies, Bingostars is a bingo site with casino elements, or a casino site with bingo elements. It's hard to say as both of these are well done and could be the leading role.

Bingostars was previously known as Bingocams, but they did a complete facelift and reworked the casino to be better than ever. They kept some of the unique features and clever ideas, but added more to the mix. You can still find all the popular bingo chat hosts.

When it comes to the casino side, Bingostars is a host to over 1,600 games, which is a good number for your average casino. It doesn't yet compete with the massive casino sites, but there are plenty of great titles, big jackpots and popular slots in there.

The casino itself is fairly simple to use and suits well even for beginners. Signing up, depositing, playing and withdrawing is made to be easy, so that anyone can play here. Bingostars is targeted more for the casual player rather than a hardcode gambler. This isn't Vegas, this is your local bet shop.

Bingostars is licensed and regulated by the United Kingdom Gambling Commission. The casino follows their rules to the letter, which makes it a safe gambling site with heavy emphasis on responsible gambling. I was impressed at how often I face those resposible gaming features, as they are front center here. 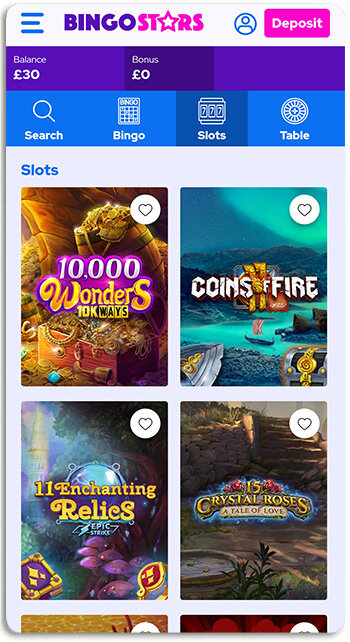 Bingostars has a first deposit bonus for new players:

When you join Bingostars and start playing, you get a welcome offer that has a bite. This offer is a kickstart, no doubt about it.

When you make your first deposit, you will get:

The minimum deposit is only £10 and the maximum benefit is obtained with £20. This is remarkably good, as it doesn't force you to deposit a lot at once.

Being an offer with this high bonus percentage, you know there are going to be more difficult terms. Here, those come in the form of 40x wagering and a £250 withdrawal cap. The wagering isn't that bad, as it is only slightly above the industry standard. Caps on the other hand are just annoying.

It can be said that £250 is a lot of money, especially when you get it as an extra for a £20 deposit. I can agree with this, but I know someone is going to get burned for not being able to withdraw everything they got from the bonus.

In the end, the deal is spicy and you get a lot for very little.

When you join Bingostars and make your first deposit, you get 20 spins on Fluffy Favourites.

These spins have a 40x wagering requirement and are part of the £250 withdarwal limit with the rest of the bonus.

Bingostars is loaded with slots, table games, live games, scratchers, and also bingo. There are over 1,600 games in total, which is a fair amount for a modern online casino.

It is hard to tell which is the big selling point for this site, bingo or casino, as both are really good. But, the site being called Bingostars, let's just assume it's the former.

Speaking of bingo, there are plenty of bingo rooms available around the clock. You can sort them out, for example, by the number of balls, jackpots, prizes, ticket prices or game type. This way you can find the rooms you enjoy. A new game starts every 40 seconds or so, so if you miss one, a new one will begin shortly.

On the casino side, you can find plenty of great slots from some of the biggest developers in the world. There are evergreen hits, new releases, jackpot games, Megaway slots and so on. In short, they have a good cross-section of all the great things when it comes to slots.

There is something though about the search functions on Bingostars, and the word I was left with was confusing. On the surface, everything is fine. There are categories and a search feature, which is all fine and good.

The problem comes with the developer search. You can use the search field for those as well, but Bingostars doesn't tell you what developers they have, so it's just a stab in the dark. And the worst part is that some developer's games are under other linked brands, like NetEnt's games can be found by searching Evolution.

If you are simply browsing the categories and using the search feature to find that one game you like, then this won't be a problem. But for me, I often like to try out games from specific providers, which is difficult here.

When they designed Bingostars, they knew that mobile gambling is an important feature, and it shows. This is one of those sites where you can play solely on your phone or tablet and never miss a beat.

The casino is compatible with all modern devices and you can play directly in your web browser. Just open the page and you are good to go.

I checked a couple of slots first and was happy with the results. The games loaded up nicely and were easy to play with my phone. Then I headed out to the bingo lobby to check what was going on, and the same thing, smooth sailing.

I could easily see myself skipping the whole desktop casino on Bingostars and just playing on my phone. There are no missing features or hard-to-use sections in the menus. It is a user-friendly experience from start to finish.

Bingostars has brought in a neat little live casino section full of great titles. They come from Evolution and Pragmatic Play, two names who are synonymous with high-quality.

The game library may not look like a big one at first, but it covers all the bases and it's bigger on the inside. There are all the classic table games, as well as game shows and a couple of international hits. Games like Andar Bahar and Dragon Tiger can spice things up a bit.

Even though you only see some 50 games when you enter the live casino section, that is not even close to the real number of tables. There are actually about 400 games available. This is because most of them are blackjack and roulette variations, which can only be seen when you open the Evolution or Pragmatic Play game lobby.

I personally like it when casinos hide the extra tables behind the lobby tiles. This way you can browse games more easily without having to wade through table after table of the same old.

Talking technical, I tried out a couple of tables from both developers, and was pleasantly surprised on the quality. Well, it's not really a surprise that they work well and fast, as they are the big dogs of the industry. It would have been more of a surprise if there was lag or any other issues.

Bingostars decided to keep things simple, which can be a great solution if your options are good. That is the case here, so you are in good hands.

Making deposits is easy with any methods available. Debit cards, Trustly and PayPal are extremely fast and reliable methods, and Paysafecard is a nice addition to the mix.

The minimum deposit is £10, which is always nice. I like it when casinos don't force you deposit large amounts just to try out a casino.

Withdrawals are processed quickly and the money is paid with the same methods you used to deposit. The minimum here is £10 as well, which is the gold standard. The smaller the limit is, the likelier it is that you can and will withdraw something.

Generally speaking, Bingostars knows what they are doing when it comes to deposits and withdrawals. Everything is handled correctly and quickly. There are no massive delays at any point, and having your account automatically verified at start means there are likely no verification checks when you make your first withdrawal.

Bingostars customer support team is there to help you if you come across any questions or issues. They start you off with an FAQ, which has some common answers. There are also additional FAQs at the bottom of the screen for the basic game-related questions.

If you want to contact the customer support, you can do so via the following:

The email support is available 24 hours a day, 7 days a week. Live chat on the other hand is open only between 09-22. The support page has a contact form for sending questions to the casino.

The customer support is, simply put, great. I needed to check a few simple details about the casino, so I decided to open the chat and ask an agent. I was quickly connected to the support and the answers just came flying. It was pretty clear that they really kniw what they are doing.

I got my answer and was left feeling happy about it. Top marks for Bingostars, no questions asked.

As Bingostars is a UKGC licensed online casino, they need to follow the strict rules on player identification.

For a player, this process is usually very easy and most likely you don't even really notice it anymore.

Everything starts when you sign up and create your account. The casino will automatically check these details against the electoral register. If you are matched, your information is verified straight away. If not, then you need to provide them with additional documents.

These documents may include:

If they are needed, Bingostars will send you an email with all the instructions.

For most people, Bingostars will automatically handle everything and you can just play and withdraw without any additional work.

Bingostars is regulated by the United Kingdom Gambling Commission, which is very strict when it comes to player safety.

This means that your personal information and money transfers are heavily encrypted, and you as a player are looked after.

Bingostars has responsible gambling tools for you, which you can use to limit how much time and money you can spend on the casino, as well as take a break or even self-exclude.

We strongly advice that all players set themselves limits, even if you don't feel like you would need them.

Bingostars is also there to help you in every step of the way. The customer support is there if you need someone to talk, and they can even direct you to external help services should there be a need for one. Services like GamCare, Gamble Aware and Gamblers Anonymous are there to help you.

Ville is an industry veteran, who has written thousands of gambling-related reviews and articles since 2009. He is an IT engineer with a passion for game and strategy optimisation, and to teach the world to play better.
Read more »