General election betting can be a thrilling experience. Markets are always open, and the odds for different election outcomes can change dramatically in just one night. 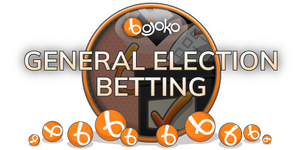 When is the next general election in the UK?

The question in the headline is a hot topic in the UK, and bookmakers have also picked up on it. Several of the most reliable betting sites offer the chance to bet on the next election date. Below you can see currently available odds from Bet365 and BoyleSports.

Year of the next General Election odds:

The last general election in the UK was held in December 2019, with the next election due in January 2025 at the latest. However, elections may take place as early as 2023. Before 2019, there were two elections on a two-year cycle, but by law, a Parliament may serve for a maximum of five years from its first meeting, which is the common period in the UK.

Here is a short guide on how UK general elections work:

Ultimately, the holding of an election depends on the will of the sitting prime minister, in this case, Rishi Sunak. The Prime Minister may call a general election at any time, 23 January 2025 at the latest. Almost 18% of bettors on the Smarkets betting exchange believe the UK's next general election will be held in 2023. 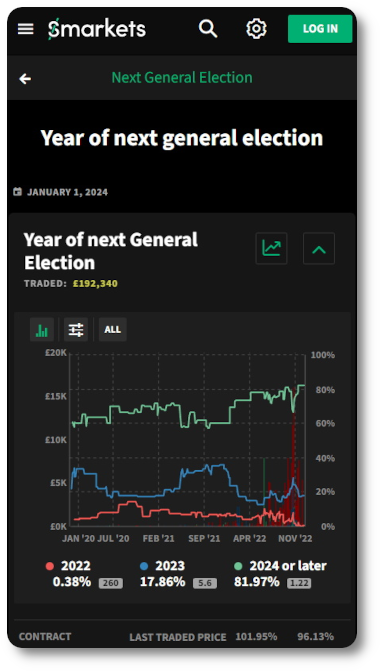 Sunak has said he has no intention of holding early elections, but he is under enormous pressure. An e-petition on the UK Parliament's website calling for an immediate general election has already attracted over 900,000 signatures. It has become the most popular petition submitted to www.parliament.uk ever.

Public opinion polls show the same story. According to a YouGov poll of voters, two-thirds of Britons believe the country needs to hold a general election as soon as possible.

For Prime Minister Sunak himself, there is still the cold fact that no one has actually voted for him as Prime Minister, and he does not have public confidence. The man was elected leader of the Tory party and subsequently Prime Minister when Liz Truss resigned after just 45 days in office.

Sunak was eventually the only candidate for the party leadership after Boris Johnson and Penny Mordaunt withdrew from the race. The party, therefore, had no choice but to confirm Sunak's victory. And since it seems that Sunak is unwilling to call elections, people have already started whispering about his departure. You can find odds from several bookies on the year of Rishi Sunak's resignation. Here are some example odds from William Hill and Betfred.

The year that Rishi Sunak ceases to be the leader of the conservative party:

In addition to the time of Rishi Sunak leaving his post, you can also find next prime minister odds on almost all the sites that provide election odds in general. You can of course also bet on Sunak keeping his job.

Conservatives or Labour, which will win the majority?

When the time finally comes for a general election, the campaigning and speculation about which party will grab the most seats and a possible overall majority will naturally begin.

At the turn of 2022-2023, odds and polls predicted that the Conservative Party's long government rule would end. Instead, Labour would emerge victorious in the upcoming general election. Polling data from YouGov, a data analytics company, clearly shows how Britain believes Labor will win the election and get an overall majority. 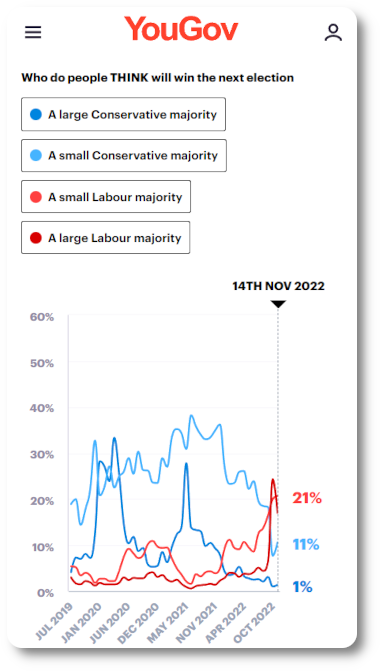 YouGov has also collected a lot of data on how likely people are to vote Labour or Conservative based on their responses. While the likelihood of voting Labour has been steadily increasing for several years, the situation looks weak for the Conservatives. Based on these and many other statistics, including the Times' report of Labour's most significant poll lead in two decades, the odds of Labour winning the elections are very low.

Odds on a labour victory:

Odds on a conservative majority:

Odds for most seats

There is the possibility that in general elections, there will not be a clear majority for any party in parliament. The party that wins the most seats is deemed the winner at the end of the day.

Betting on the government after elections

After all the campaigning, polling, voting and counting, the final step in a general election is to form a government.

If a party wins a majority of votes in the election, it will form a government and share ministerial duties between them. The same is often true for a minority-majority government, but alliances between parties are also possible. For example, between 2010 and 2015, the British government was run by a partnership of Conservatives and Liberal Democrats known as the Cameron-Gregg coalition. 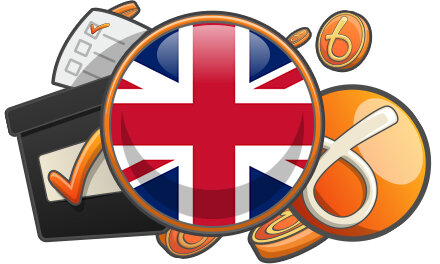 The odds currently favour a Labour majority or minority government in the UK after the general election, but there are also some exciting betting odds on other options. Here are the odds for the next government after the elections, offered by 21LuckyBet:

Bet on general election at 21Luckybet »

The purpose of by-elections is to elect representatives to a particular constituency or Parliament through election-style voting. By-elections occur when a seat becomes vacant, such as as a result of a transfer or death.

While by-elections are less common than ordinary elections, they are essential because they allow voters to choose who will represent their area in Parliament. As well as providing political parties with feedback on their performance, by-elections are also an opportunity for them to test support and communication.

The same principles apply to by-elections as to ordinary elections. Voters choose the candidate who will represent them in Parliament. Candidates are often members of political parties or independent candidates. As a result of the election, the selected candidate becomes a member of Parliament and begins their duties. The outcome of the by-elections could affect the balance of power in Parliament.

Betting on by-elections is as popular as wagering on general elections. The betting market for by-elections is steadily opening up across the UK. We aim to publish the latest by-election odds on Bojoko when available. So keep an eye on our website and this article!

Besides sharing the general election odds, Bojoko offers plenty of other political odds and betting tips. If you are interested in betting on politics, then you should check out the following articles and pages:

The general election betting odds are easy to find. Here's what you need to do:

Step 1: Check out different betting sites such as:

Step 3: Place a bet on the general election!

The secrets of winning election bets are patience and the ability to react quickly. In most cases, you must wait for the election bets to settle. However, some betting sites offer cash-out options on political wagers, and they are worth the money if used at the right time. Read more tips on election betting in our guide.

Currently, the odds of Labour winning the overall majority at the general election are 10/11, and for most seats, 1/3.

You can check other odds from here.